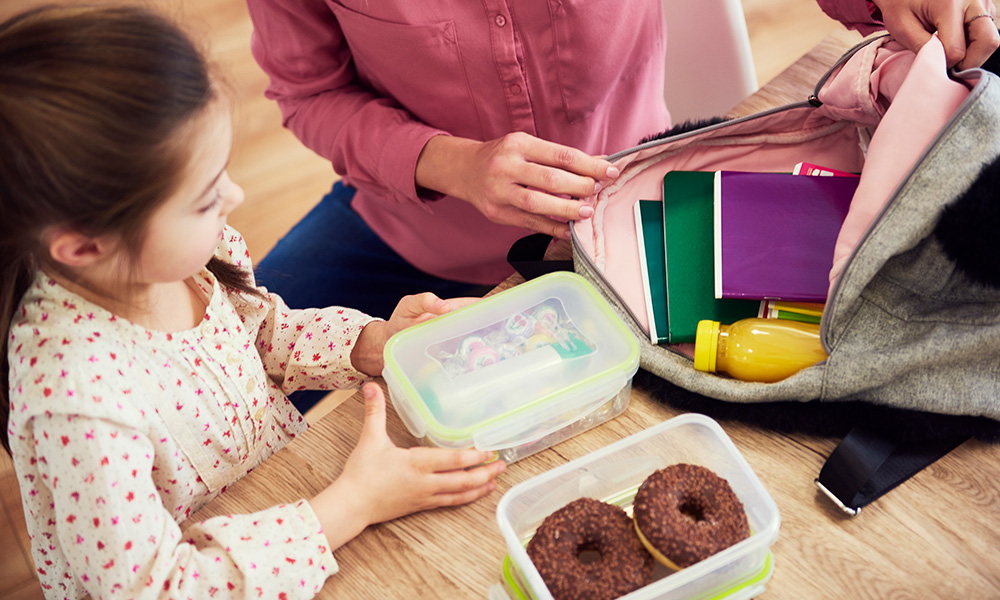 New research from UBC Okanagan’s Alanna Shwed has revealed what many parents may already know—packing lunches for your kids has always been stressful, and it got worse during COVID-19.

Findings from Shwed’s study show a need for better support to help ease the burden parents experience when packing their child’s school lunch during an already extremely stressful time.

Shwed undertook the work as a research assistant during her Master of Science degree in Kinesiology at Nipissing University in North Bay, Ontario. She is now pursuing a doctorate at UBCO.

It was conversations with her master’s supervisor Dr. Brenda Bruner and Dr. Kristen Ferguson—both working mothers who pack lunches—that led to this research. They wanted to know if other parents were thinking the same thing: what happens at school lunchtime in a pandemic?

“Mostly it came out of curiosity,” Shwed says, “but also from lived experiences of being parents themselves. The pandemic affected everyone, especially parents. We wanted to find out whether there’s a way that we can more creatively support parents.”

The research began before COVID-19 heaped more pressure on parents trying to balance their children’s nutritional needs and their wants.

Rather than shelve their work until after pandemic restrictions eased, Shwed and her colleagues used it to sharpen their focus.

They recruited nearly 300 participants from parent-specific Facebook groups across Ontario. The parents then completed a detailed, online survey about lunch packing habits. Shwed’s team also scoped all earlier research into the subject to design their survey.

Some schools restricted access to microwaves while others asked children to take all their garbage home with them.

“When you send your child to school with a yogurt, unless they’re washing the container clean, you’re getting some of that yogurt back in the lunch bag at the end of the day,” she says.

Other schools reduced eating time or changed where students ate lunch. And some teachers were limited in how they could help students with packaging or opening lids.

“Parents told us they’d have to practice,” Shwed says. “They’d get their kids to test out what’s going to work, and what’s not going to work. Before the pandemic teachers used to be able to help kids, so it wasn’t something parents necessarily had to think about.”

The data could help parents and teachers understand each other and the stress of school lunches, better, Shwed says.

Her study finds parents would benefit from more transparency behind the reasons for at-school policies, and schools and school systems are reminded of at-home realities.

“Moving forward, there is opportunity for providing support for parents, for teachers, for school administration to make sure that kids are eating enough and have enough time to eat so they can get through the day,” Shwed says “That’s going to make the day easier for teachers and the evening easier for parents.”

The study appears in the Canadian Journal of Dietetic Practice and Research. 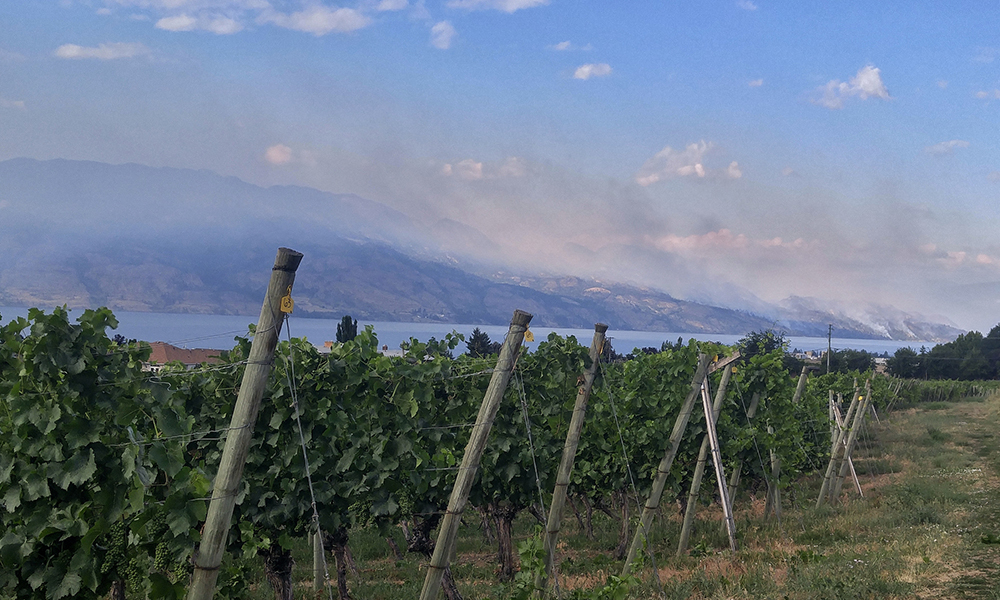 Researchers from UBC Okanagan are striving to better understand how to measure wines impacted by wildfire smoke.

As climate change continues to intensify wildfire season in British Columbia, the heavy smoke that frequently settles over vineyards can seep into the grapes and create ashy, smoky or medicinal-tasting wine.

New UBC Okanagan research examines how these wines are being tested and suggests a better chemical marker for predicting smoke taint.

Dr. Wesley Zandberg, an Associate Professor of Chemistry in the Irving K. Barber Faculty of Science, collaborated on new research published recently in the journal Molecules. Key participants in this project included researchers at Kelowna-based Supra Research and Development and the University of Adelaide.

The teams studied 10 Okanagan wines produced in 2018, a serious fire season. All wines were perceptibly influenced by smoke exposure. Three wines were on the market but identified as “smoke affected” and seven were never marketed because of the high levels of smoke taint detected after fermentation.

Researchers sent these tainted wines—as well as model wines deliberately fortified with carefully determined concentrations of chemicals linked to the aroma of smoke—to nine commercial and research laboratories around the world to compare concentration results and assess testing accuracy.

The nine laboratories had very similar—and accurate—results in calculating the concentrations of generally accepted markers of smoke taint like guaiacol and 4-methylguaiacol.

However, they had much lower accuracies for other volatile phenols and particularly for free cresols—a class of related compounds. Not only were the laboratories less accurate in identifying these free cresols, but the calculated concentrations of these free cresols in the tainted wines varied significantly between each lab.

“It’s important to notice that just because these chemical markers of smoke taint are there and can be measured or tasted, that doesn’t mean you have a tainted product,” says Dr. Zandberg. “That’s why it’s important to distinguish between smoke-tainted and smoke-affected wine. Just because smoke can be perceived doesn’t mean necessarily the wine is tainted, since this can be subjective.”

For example, people might appreciate the taste or smell of smoke in wine. Smoke can add to a wine’s profile depending on the balance of other tastes and consumer preferences, he says. However, if the smoke taste is beyond what a majority of people would enjoy, it becomes smoke tainted.

The paper notes that some volatile phenols naturally occur at high levels in certain species of grapes like Shiraz, which is associated with a peppery taste. Guaiacol can also be present in significant levels after wine matures in oak barrels.

In a related project, Dr. Zandberg’s team is currently working on defining the normal levels of naturally occurring phenols in years unaffected by wildfire smoke.

Judges differentiated between fruitiness and acidity and the sensory evidence of smoke exposure, like cold ash, medicinal or burnt rubber aromas and flavours, as well as an ashy aftertaste.

Interestingly, concentrations of free cresols—the same compounds that the laboratories were least accurate in identifying—were most strongly correlated to the taste and smell of smoke taint in the sensory tests.

Wildfire smoke will continue to impact Okanagan vineyards and those around the world, Dr. Zandberg says. While the taint will vary between regions, because it is determined by the vegetation that has been burnt, his ongoing research will help wine producers better protect their products.

“This kind of research is valuable because it can provide more accurate and more regionally relevant risk assessment tools,” says Dr. Zandberg. “It can importantly help wine producers connect chemical measurements to the taste and smell of their product, and that leads to improved ways to potentially mitigate this problem and reduce smoke taint in Okanagan wines.” 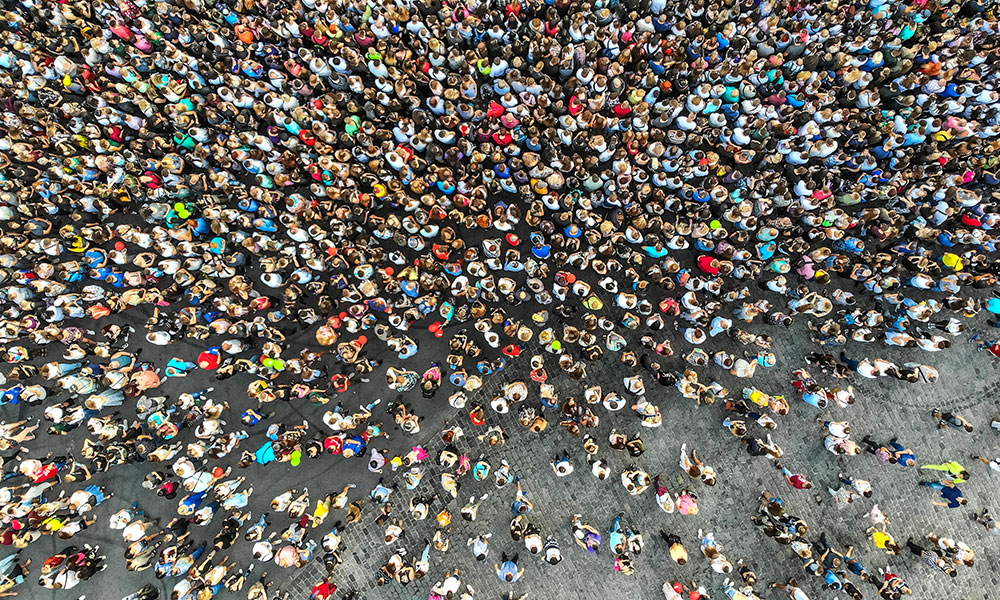 Crowds as large as this may become more common in countries around the world beyond 2022. The United Nations predicts the human population will hit 8 billion people on November 15.

If the United Nations’ prediction is accurate, the world’s 8 billionth baby will be born on Nov. 15.

The UN’s World Population Prospects 2022 says the earth will crest 8 billion just before India surpasses China as the globe’s most populous nation—expected in 2023. Further, the UN predicts the world’s population will peak at 10.4 billion in the 2080s.

Yet, that same United Nations estimates 821 million people are undernourished, many of them being low-income consumers, women and children who are especially vulnerable. How will we feed and house all these people? What will they do for work? Who will teach them and keep the laws?

What is a world to do?

Robert Godin researches sustainable energy with a focus on the development of photocatalysts which can harness solar energy to sustainably produce high-energy chemical fuels such as hydrogen. He says technology has created something of a run-on effect with energy.

“A transition to sustainable energy in a world with 8 billion people is not only possible, but necessary. Population growth and increases in quality of life have driven the constant increase in energy demand. Yet, improved energetic efficiencies don’t balance the growth and often result in even greater energy consumption by making technology more accessible.”

Ross Hickey teaches management and economics at UBC. His research on charitable giving in Canada considers the distributional consequences of population growth. In particular, he studies how Canadians give to help others overseas.

“Population growth can be a major contributor to economic growth, but there are trade-offs: that growth may not be shared equally and the environmental costs associated with more people, goods and services may be difficult to address.”

Katrina Plamondon’s contributions to a global pandemic treaty are made possible through her research into vaccine equity at UBC Okanagan. A 2020 Michael Smith Health Research Scholar, Plamondon leads national dialogue about equity and Canada’s role in global health research, with a special focus on issues of vaccine equity.

“Our collective, global health, solidarity and obligations to others beyond our own borders in the world matters. This requires us to think very differently about the planet, beyond international health.”

Joanne Taylor is a Social Sciences and Humanities Research Council of Canada Postdoctoral Fellow in agricultural climate change adaptation and food security policy. Her work is at the crossroads of sustainable agriculture, climate change and population growth.

“Much of the global population is dependent on an industrialized food system that is currently at capacity and unable to fulfil global food demand due to stressors such as burgeoning population growth, inflation, inequality and catastrophic climate change which is severely impacting food security for the most vulnerable. It is imperative that agricultural adaptation is implemented and practised alongside mitigation policies as a key strategy to becoming more resilient in an increasingly extreme climate. More importantly, humanity must consider alternative food practices such as Indigenous food production and small-scale farming.”

Lisa Tobber and her team of structural engineering researchers adopt a holistic perspective that considers the social, environmental and economic factors behind the vast engineering problems faced today. Combating natural disasters and the climate crisis takes the ingenuity and creativity of an inclusive group of diverse individuals with a range of expertise and lived experiences.

“Structural engineers will be challenged to build much-needed infrastructure to be safe, sustainable, resilient to climate disasters and earthquakes, quick to construct and economical. We need the construction industry to be innovation leaders, exploring the use of new materials, systems and tools. We also need to think about building for the future, design for the life cycle of the building and design for deconstruction.”

Nathan Pelletier is an industrial ecologist and ecological economist whose research addresses the intersection of food system sustainability measurement and management.

“Access to food of sufficient quality and quantity is a fundamental human right that is currently denied to hundreds of millions of people. Food systems are also a key driver of environmental change, as well as particularly susceptible to increasing climate unpredictability. Identifying means to sustainably feed the growing human population constitutes a profound challenge whose resolution requires research to identify and support implementation of a spectrum of technological interventions, dietary changes and redistributive efforts.”